"The eyelashes are always scratching my eye and it makes it difficult to do any work. It is very painful... But when you pull out your eyelashes, they multiply. At first there is one hair, then they double."

Dinknesh lives in a tiny village nestled in the hills of northern Ethiopia, East Africa, where spikey cacti line the fields. The 38-year-old lives with her husband and their three children in a small traditional home. Dinknesh cooks over the fire outdoors.  Beyond the low stone wall behind her home, there is a pit latrine, and a field where a few goats are grazing.

In this rural environment, flies are everywhere.  They carry bacteria that causes a condition called trachoma. Trachoma is an extremely painful disease and the main cause of blindness by infection globally. It is one of a group of diseases known as Neglected Tropical Diseases, or NTDs, which primarily affect the world’s poorest people.

After years of repeated infection, trachoma slowly caused Dinknesh's eyelids to turn inwards and scrape against the eye. Every blink became agonising. Dinknesh resorted to pulling out her eyelashes with a werento- a small pair of tweezers. She found it too painful to pull out her own eyelashes so her sister would help. But the relief is short-lived: “When you pull out your eyelashes with a werento, they multiply. At first there is one hair, then they double,” says Dinknesh

Cooking also became a major challenge as the smoke irritated Dinknesh's eyes: “I can't see or do anything if there is smoke. To prepare food is difficult,” she told us. 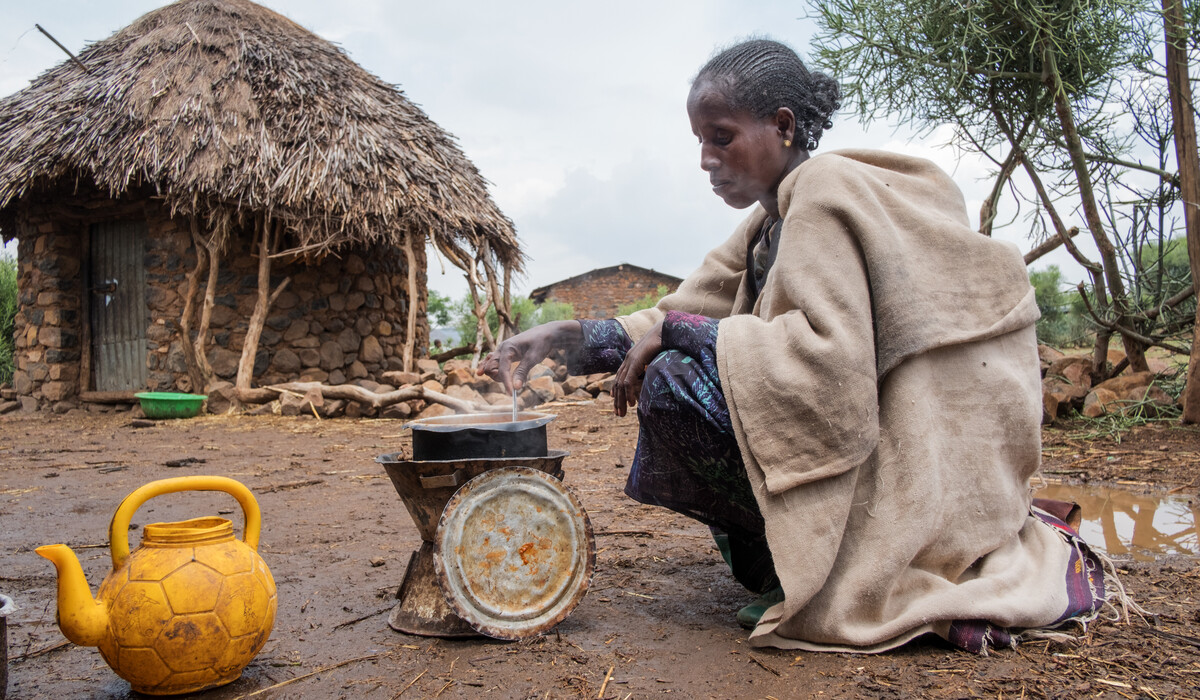 The turning-in of eyelashes can be surgically corrected before it causes permanent damage to the eye and, ultimately, blindness. But in this remote, rural community, access to treatment can seem impossible.

But thanks to CBM supporters, a treatment team visited Dinknesh’s community, bringing a skilled surgeon and team to reach people like her. They set up at a CBM supported government health post, less than a kilometre from her home.  Dinknesh was surprised when the health extension workers in her community told her the surgery would be performed at the local clinic – and delighted to hear that she would not have to pay, as most healthcare is not free in Ethiopia.

“I did not expect to receive healthcare for free, so I am very happy! I know somebody paid for my surgery: May God bless them.”

Just thirty minutes after the operation, Dinknesh leaves the clinic with a bandage over her eye and walks home.  It is a minor procedure, but the impact for Dinknesh is huge.

Four days later, her sister tells us:  “Before, I would feel sad when I'd have to pick out her eyelashes. But now she is doing well and doesn't need me to do that anymore. I am so happy”.

“I am feeling better already”, says Dinknesh. “I am so thankful for what has been done for me”.