We are very grateful for the support from our wonderful Patrons, Champions and Friends who generously give their time to support our campaigns and projects as we work together to save sight, improve health and transform the lives of people with disability in the world’s poorest places. 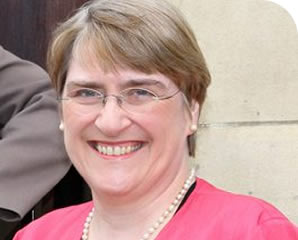 The Rt Hon The Baroness Brinton

After serving for many years as a Trustee of CBM UK, Baroness Sal Brinton became our Patron in 2011.

Sal has been President of the Liberal Democrats since 2014. She became a member of the House of Lords in 2011 after a career of more than two decades in the education sector. Until 2011, she was Director of the Association of the Universities in the East of England.

Sal is an active campaigner for the rights of people with disabilities and served on a Select Committee in the House of Lords looking at disability (2015-16). She has rheumatoid arthritis and uses a wheelchair most of the time.

An active member of St Luke's Church, Langley Way in Watford, Sal is Vice Chair of the Christians in Parliament group.

Our Champions generously give their time and skills to help us raise awareness and funds. They share our passion for building a fairer, more inclusive world and are committed to helping us bring about lasting change for people with disabilities in the world’s poorest communities. 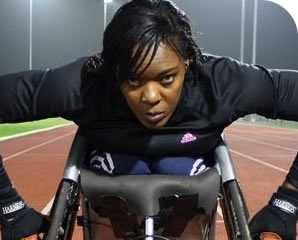 Anne Wafula-Strike MBE, is a former Paralympic wheelchair racer who has competed for both Great Britain and Kenya. Anne grew up in Kenya where she contracted polio aged two, paralysing her from the chest down. Her family faced such hostility from neighbours, who feared that she been cursed, that they were forced to move away from their home village. Having faced prejudice and stigma herself, Anne is passionate about changing attitudes to disability and ensuring people with disabilities have the same opportunities as others.

After qualifying as a teacher in Kenya, Anne moved to the UK with her British husband. Her autobiography ‘In my Dreams I Dance’, was published in 2010. She is a non-executive Director of UK Athletics.

“As a Christian, I believe we all have a responsibility to reach out to people who need our help, so I’m proud to be part of the CBM family. CBM provides practical support that enables people with disabilities to overcome the barriers they face and fulfil their potential. But crucially we also work to change attitudes.” 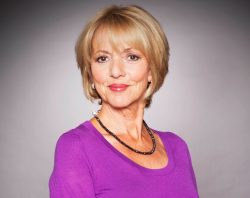 Trudie Goodwin is an actor, best known for playing Sergeant June Ackland in the British television police drama The Bill and Georgia Sharma in ITV soap Emmerdale. She has also appeared in stage productions, Heartbeat, Casualty and Doctors.

Trudie has experienced hearing loss since childhood and is committed to tackling stigma and ensuring that people with disabilities around the world can fulfil their potential. She has supported the work of CBM since 2004, when she visited a CBM-supported eye hospital in Nigeria. Most recently, Trudie voiced a film as part of our 2019 See the Way campaign.

Watch the heart-warming video of Trudie’s trip to Nigeria

“It turned out to be one of the most extraordinary and moving experiences of my life. Seeing the way that CBM UK is working to improve the lives of people with disabilities in circumstances far, far more difficult than mine, regardless of faith, all over the developing world has meant I have remained a supporter over the years. CBM UK’s ongoing work and their exciting ideas for new projects, means that they will continue to empower people with disabilities and provide a future for them. I want to be involved in that future and I really hope you will too." 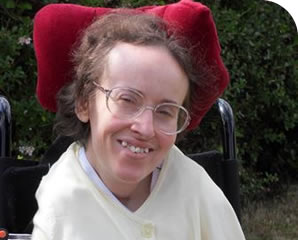 Victoria Brignell is a radio producer and disability champion. She has been tetraplegic - paralysed in all four limbs - since she was six years old. Victoria has written widely and engagingly about disability and social-care issues, including for the New Statesman and Ouch! – the BBC's website about life with disability.

“I believe passionately that people who live in prosperous parts of the world have a responsibility to assist those who are not so lucky, and that is why I support the work of CBM, as it plays a vital role in helping those less fortunate. Every person with a disability throughout the world should be able to live independently, and have the chance to contribute fully to their community.”

These generous friends have supported our work in different ways, adding their voice to our campaigns, speaking out about little-known disabling conditions like fistula or challenging stigma around disability. Read more about how they’ve helped and their motivation below. 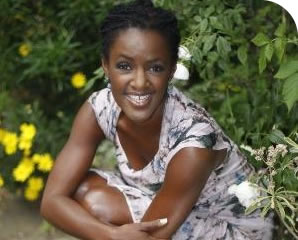 Diane Louise Jordan is a TV and radio presenter, best known for her work on Blue Peter, Songs of Praise and Radio 2’s The Sunday Hour. Diane is particularly passionate about our work to prevent blindness, after witnessing both her parents struggle with eye conditions. She first teamed up with CBM UK in 2014 for our Light up Lives Campaign and has since added her voice to several sight-saving campaigns, including our 2018 TV advert campaign. In 2020, Diane visited our work in Rwanda with her grandson Preston.  Watch Etienne's Miracle, the story of Diane's meeting with a young boy with cataracts and his sight-restoring surgery.

"I truly admire the passion of CBM UK, a charity that works tirelessly in some of the planet’s poorest communities to restore sight, mobility and independence to those living with disability. Simply put CBM UK demonstrates love in action for many of the most marginalised people in our world today." 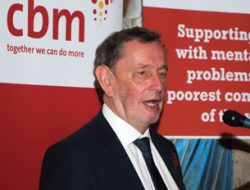 The Rt Hon. The Lord Blunkett

David Blunkett is a former Home Secretary who became the UK’s first blind Cabinet Minister in 1997.

One of the most prominent Labour politicians in recent years, Lord Blunkett represented the Sheffield Brightside and Hillsborough constituency for 28 years (1987-2015) and served as Education and Employment Secretary, Home Secretary and Work and Pensions Secretary.

In November 2017, Lord Blunkett hosted a reception on behalf of CBM at the House of Lords. In a foreword to 21 Stories, a publication marking CBM UK’s 21st birthday, he wrote:

“Too many people with disabilities in developing countries are unable to fulfil their potential, held back by lack of access to education or healthcare, basic assistive devices like wheelchairs or hearing aids, and crucially by social attitudes that isolate women, men and children with disabilities and can rob them of self-belief. With a billion disabled people worldwide, it’s a devastating waste of opportunity, not just for individuals but for whole families, communities and societies. So as CBM UK marks its 21st anniversary, I urge you to support their important work creating opportunities for people with disabilities and encouraging other organisations to do the same.” 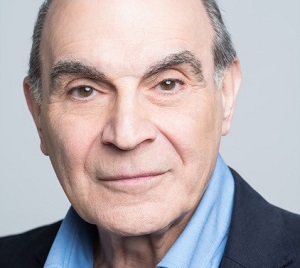 David Suchet CBE, is an award-winning actor well known for playing Agatha Christie's detective, Hercule Poirot, as well as numerous other roles for stage and television. A committed Christian, in 2014 he made a complete audio recording of the New International Version of the Bible. In 2018, David spoke out in support of our ‘Colours of Christmas’ appeal:

“It’s hard to imagine Christmas without colour, particularly for a child. As a grandfather, I love to see my grandchildren enjoying the bright colours of the tinsel, the sparkling lights, colourful wrapping paper – all part of the joyous celebration of Christ’s birth…. That’s why I am proud to be supporting Christian Blind Mission with their campaign to improve access to cataract surgery in the world’s poorest places, so children can see and enjoy the colours of Christmas. I hope you will join me and help give the precious gift of sight.” 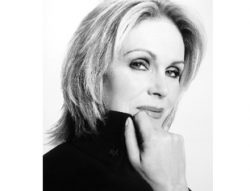 Joanna Lumley OBE, is one of the most-loved and respected actors, TV presenter, author and activist. . Joanna has helped raise awareness of fistula, a disabling condition that affects women after traumatic childbirth. In 2016 she spoke out in support of our work to help women with the condition on International Day to End Obstetric Fistula:

“I was so horrified to hear that around 2 million women are suffering with Obstetric Fistula. Not only have they endured a traumatic labour, in many cases resulting in the tragic loss of their baby, they are left with life-changing damage to their bodies. To then be shunned by their communities, is beyond belief 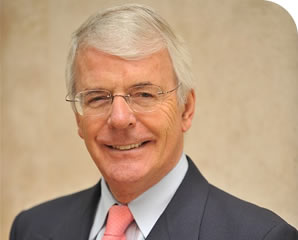 Sir John Major served as Prime Minister from 1990-1997. He is currently Chair of the Queen Elizabeth Diamond Jubilee Trust, a charitable foundation established in 2012 to mark and celebrate Her Majesty The Queen’s sixty-year contribution to the Commonwealth. The Trust has supported the work of CBM and other members of the International Coalition of Trachoma Control to eliminate the blinding eye infection Trachoma across Commonwealth countries. Sir John has also spoken out in support of CBM’s work to tackle avoidable blindness:

"I fully support CBM UK’s work improving the lives of people with visual impairments in the poorest countries of the world. Those of us with sight are extremely fortunate, and anything we can do to eliminate avoidable blindness - and enrich the opportunities of those without that gift - is enormously worthwhile.” 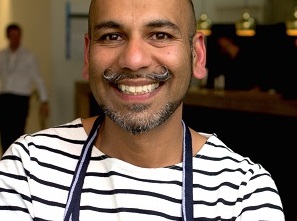 Ivor Peters, also known as the Urban Rajah, is a TV chef, food writer, traveller and lifestyle adventurer who has supported our work for a number of years. Explaining his support for our 2019 See the Way appeal, he said:

“I’m delighted to be supporting CBM’s See the Way appeal because nobody should go blind just because they can’t afford an operation, or struggle at school because they don’t have a pair of glasses…” 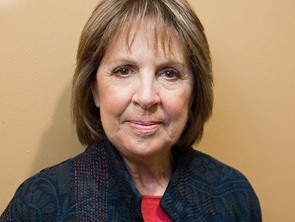 Dame Penelope Wilton is one of Britain’s most loved and sought-after actors, whose career has spanned acclaimed performances on stage, screen and television. She is a household name for many TV and film roles including Downton Abbey, Ever Decreasing Circles, The Best Exotic Marigold Hotel and The BFG. Penelope has been a supporter of CBM since 2012. In 2016, she presented our BBC Radio 4 appeal and in 2018, added her voice to films introducing our work:

“When I first came across CBM, I was shocked to learn that people in developing countries are going blind because of conditions like cataracts. Cataracts cause half of all blindness. They can be treated with straightforward surgery - and yet for thousands of men, women and children in Africa, this simple operation is out of reach. If you're living in poverty in a developing country, it must be truly terrifying to lose your sight. So several years on, I'm still as committed as ever to helping CBM train doctors, equip hospitals and fund operations, so we can build a world where no-one is needlessly blind.” 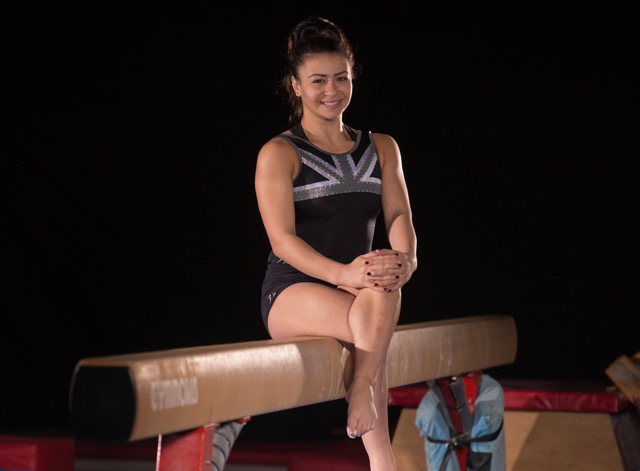 Claudia Fragapane is an Olympic gymnast who rose to fame at the 2014 Commonwealth Games, where she was the first British woman to win four gold medals since 1930. In 2016, fresh from competing in the Rio Olympic Games, Claudia took part in the BBC One competition, Strictly Come Dancing, making it all the way to the semi-finals. Speaking in support of Christian Blind Mission Sunday in 2018, Claudia said:

“It’s shocking to think that children are losing their sight just because they are poor. That’s why I’ll be supporting Christian Blind Mission Sunday on 14th October, helping CBM fund sight-saving operations and treatments in the world’s poorest places, so together we can build a world where no child is needlessly blind”.